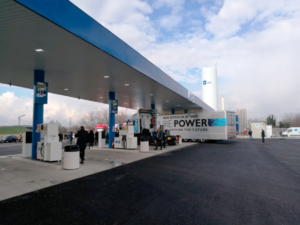 ITC , environmentally friendly. Together, for a green future!

We are proud to announce that starting from January 1st, 2021 most of the vehicles going to Germany will be powered only by methane.

Trying to achieve road transport that is sustainable for the environment and, from an economic point of view, for businesses, is now possible, thanks to LNG, better known as liquid methane. This emerged during a seminar organized by CNA FITA Modena together with Federmetano.

“85% of freight transport in our country is by road. A fact that reminds operators of a precise responsibility in terms of environmental sustainability. But this sustainability, in order to be shared, also requires economic compatibility, which today, fortunately, is increasingly within the reach of companies in the sector”, says Gianni Righetti, president of CNA FITA Modena.

This is demonstrated by the facts: in 2019 there were 893 registrations of heavy goods vehicles (over 3.5 tonnes) powered by LNG, an increase of three figures compared to the previous year.

In order to encourage the spread of these vehicles , however, the increase in the distribution network will be decisive, which is constantly growing, but which today has only 1,365 plants, of which only 47 on the motorway. A distribution, moreover, not homogeneous, given that half of these distributors are in the north and only one in five in the south, with the emblematic case of Sicily, where we do not find any methane plants

It is also the customers who are pushing the sector towards the use of more environmentally friendly fuels than diesel: increasingly, pollution-oriented companies favour suppliers with a low environmental impact activity and transport is not excluded from this trend.

The answer to this question for adaptation to environmental criteria lies in the costs and evolution of the vehicles. For the same performance compared to diesels – reveals Ernesto Rossi, of Scania – today there are vehicles with autonomy on the market that can reach 1,400 kilometers, able to guarantee reductions in CO2 emissions that start from 15% to arrive, with the use of biomethane, up to 90%. A fuel, the latter, of which you can feed in about ten distributors in Italy: four in Lombardy, one in Veneto, three in Emilia (one in Modena, in Spilamberto) and three in Campania.

But, aside from the fuel used, an adequate driving style can lead in itself to significant savings in consumption, “up to 12% – the speaker is always Rossi – with a positive impact both in ecological and economic terms”.

As is often the case, in company choices, the difference (also) makes the costs, and the tractor of a methane truck is still significantly more expensive than a diesel one: about 25% more, to which state incentives must still be subtracted. Maintenance is also more expensive, but the price of fuel must also be put in the account: at today’s costs, one kilogram of methane is just under a litre and a half of diesel.

“What makes the difference is the culture :  knowledge : ‘’ Often’’ – licia Balboni, president of Federmetano, speaks ‘’ there is no awareness of the potential that concerns methane. This is something that there is a lot to work on.”

The natural alternative to Diesel.